MotoGP 09/10 will see the introduction of a fully realised Career Mode where players can take part in the ultimate MotoGP world championship both competing in races and managing all aspects of their team. Gamers will be able to hire engineers, team managers and press officers, all of whom will have a real effect on their career as a racing pro. Complementing Career Mode, MotoGP09/10 will feature three other gameplay modes to deliver a MotoGP experience that will appeal to followers of the world’s premier motorcycle championship and racing fans alike. Arcade mode is not limited to a simple first to take the chequered flag mechanic, but adds a variety of challenges where players can earn and steal points from their opponents, encouraging a risk element for those who feel that simply leading the pack isn’t enough. As an official licensed title, MotoGP 09/10 will naturally allow gamers to compete in a full championship season across any of MotoGP’s three bike classes. For those who like to pit their skills with fellow racers from around the globe MotoGP 09/10 offers a robust online mode, with full leader board plus spectator mode all planned. 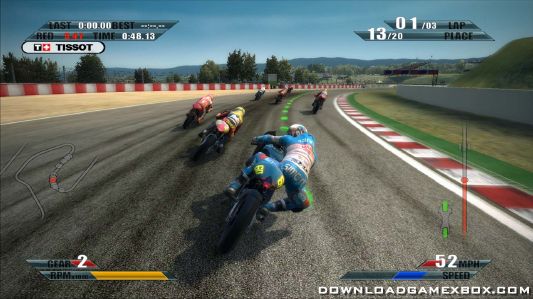